What is “Keto” or a Ketogenic Diet, how do you do it? Miriam and Chris from Keto Chow sit down to talk about how to do a well-formulated ketogenic diet and set yourself up for success.

We have several other videos you should check out:

Here are Chris’ suggestions for calculating your macros:

Carbs are an upper limit, meaning do not go higher than that. You want to be as far below them as possible, approaching zero if you can.

You want to hit your protein goal. If you go over it, that’s not a big deal. There’s a thing in your body that can turn protein into glucose but it’s DEMAND driven, not supply-driven, and so long as you’re keeping your carbohydrates low, your insulin will be low as well and too much protein isn’t something to be concerned about. Too little protein is a problem. A lot of people argue about this but Dr. Benjamin Bikman settled the debate back in 2018:

Fat is more variable. If your insulin is low then your body will be able to supply fat using your body’s reserves (yay!). If you are just starting keto then your insulin is likely high enough that the fat is locked away and you will not be able to access it readily. Here’s the rub: you’re not eating carbs so you don’t have glucose; but you also can’t access stored fat so unless there’s sufficient fat on your plate, your cells will not have any sources of energy and you’re going to get hungry. Probably REALLY hungry and think this keto thing is a pack of lies. The solution is to make sure you are getting sufficient fat until your body figures out what it’s doing and can pull from storage. Especially when you’re starting up the amount of fat you’re eating. Throw some extra butter on your steak, add some more heavy cream to your diet root beer, etc… After you’ve adjusted, then you can start running a caloric deficit but you’re probably not even going to need to deliberately do it since your body should clue-in and tell you “nah, I’m full – save that for later”

Finally: this cannot be emphasized enough: get salt. Like: a lot of salt. Not to be melodramatic but everything you’ve been told about limiting salt consumption is dead wrong and has no application to a ketogenic diet with low insulin levels. Salt your food. Salt your drinks. Eat some pickles. Drink some pickle juice. Make some chicken broth. Add more salt to your food. Failure to get enough salt will result in you feeling like crap and getting “Keto Flu” – I can speak from experience.

Informational video: What is Keto Chow?

Miriam and Chris Bair from Keto Chow sit down to briefly talk about what Keto Chow is. It’s a meal replacement shake mix that’s designed to make getting the right nutrients on a ketogenic diet easy. Unlike many “meal” shakes you may have tried int he past, Keto Chow is an actual meal that completely replaces 1/3 of your daily food and gives you exactly what you need. It’s loaded with vitamins, minerals, protein, electrolytes, and more; but you get to choose the amount and the kind of fat that you want to add. This part lets you customize Keto Chow to fit your specific needs. Whether you need 1200 calories a day and prefer heavy cream, or you’re needing 2500 calories a day and like butter or coconut oil for your fat; Keto Chow lets you customize it to your needs. 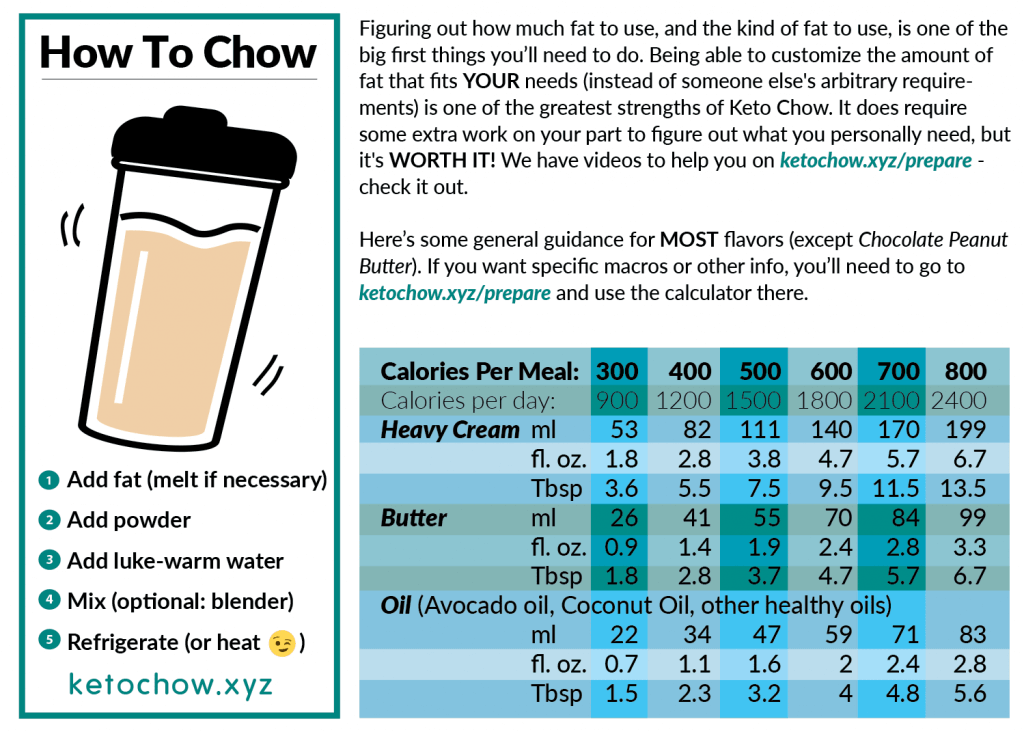