In 5 days, starting January 2, I’m going to do 100 days of ONLY Keto Chow for all my meals. 6 weeks in, I’ll finish a weight loss contest and start some science. I doubt anyone will want to join in on the science portion with me, but everyone is invited to join on doing a solid 100 days of Keto with no cheating, no compromises.

Some time ago (4 years ago!) I participated in my local city’s January weight loss competition, ended up getting second place. There’s another one coming up on January 2, 2019, and I think I’ll do it again. The contest runs for 6 weeks. There are weekly weigh-ins for the contest and some modest prizes for the winner and runners-up. There’s going to be a lot happening with Keto Chow in the next 100 days so this will give me a push to blog about what’s going on daily. I’m planning on also doing a video each day as well.

So there you have it. Now it’s written down so I’ll actually do it. I think it’s pretty ambitious.

Yesterday I announced that I was going to be starting a bit of fun on January 2, 2019: I’ll be doing 100 days of Keto using Keto Chow. Part of it will be for a weight loss challenge my city does, and part of it will be doing some science with controlled variables. I decided that everyone should be able to get in on the fun too!

You are officially invited to join in on the first month with me! 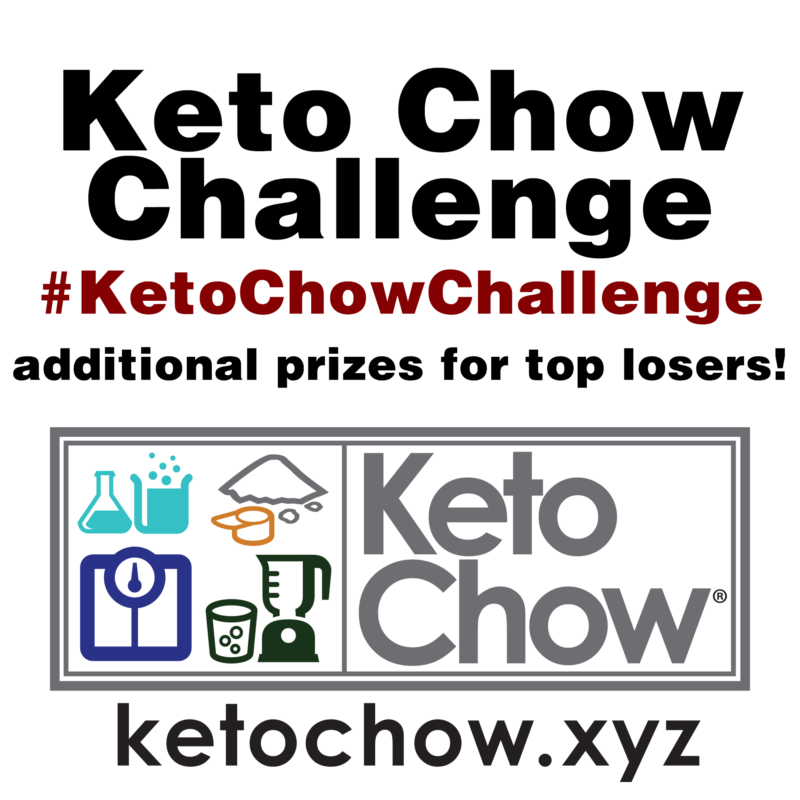 I set up a DietBet challenge this morning with the entry amount at $10 (the lowest I can set, I want the barrier to entry low!). The challenge runs for 4 weeks from January 2 through January 31. DietBet does its thing and there’s a pot for anyone that loses more than 4% of their body weight but we’re just going to be using DietBet so that they can handle all the verification and such. The REAL prizes are as follows:

Employees of Keto Chow (including me) will also be competing, but there will be different prizes for them, so don’t worry =).

One thing to note: When you sign up, DietBet is going to try to get you to add a $5 membership and a trial of some exercise program. Personally, I’d recommend declining both:

3 days until the madness begins =) In case you missed yesterday’s post: In addition to doing 100 days of Keto Chow only, doing a weight loss challenge for my city, and doing some science – I also set up a DietBet challenge so that others can get some motivation for 2019. It’ll run for 4 weeks from January 2-31. You aren’t REQUIRED to do only Keto Chow like I am, but you are welcome to do so if you wish (I’m not going to be policing anyone =). Just to be clear: I am going to be having diet soda and occasional sugar-free gum. I’m also considering using some of the various recipes that use keto chow as an ingredient during the first 6 weeks of the 100 days when my primary goal is straight weight loss only. Once I enter the science and controlled variables phase, things will get far more rigorous.

We hosted a family “Christmas Breakfast” with my wife’s family today, a few days late and a few hours late; still fantastic. Everything we had out was keto:

The food that was brought in wasn’t so keto but that’s OK, I still enjoyed my food. Eating keto sucks =P (yes, that’s sugar-free maple syrup on my sausage). 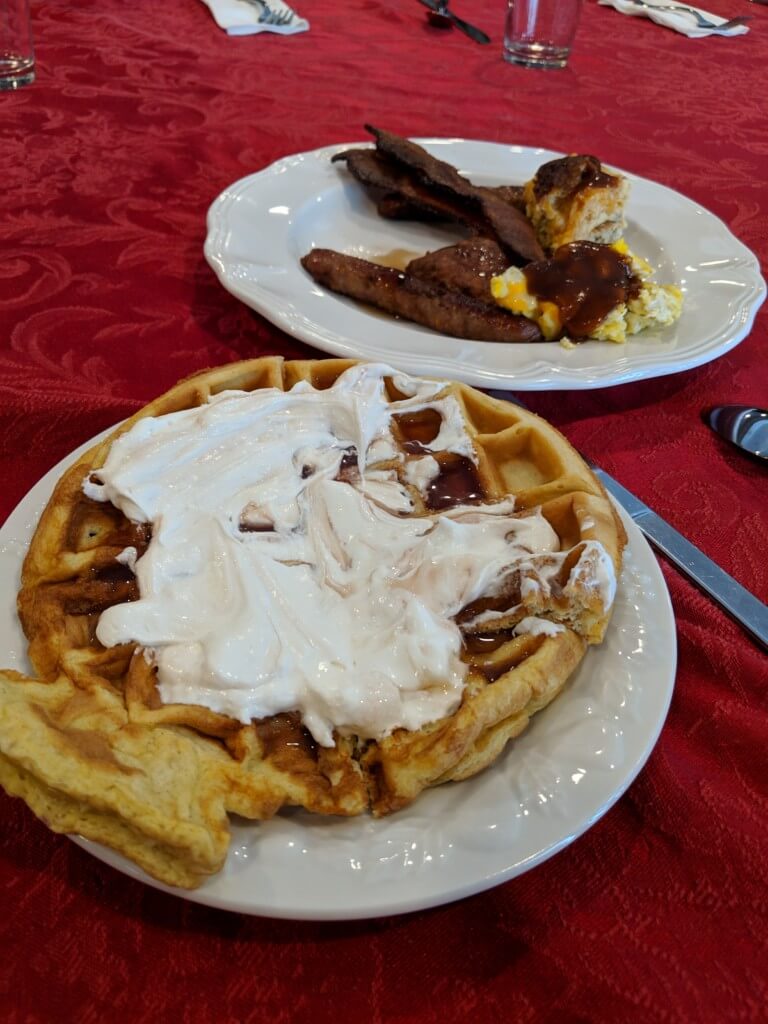 Hoo boy, we’re getting closer to the starting of the challenge! Since I won’t be much fun in respects to going out to dinner for the next 14 weeks, last night my wife wanted to go out to dinner one last time – so we went to a Brazillian BBQ Churrascaria. It’s the kind of place where they bring around spits and slice off slabs of delicious fatty meat. Good stuff.

Tomorrow we’re going to have our New Year’s party. I’ll post about that later, this is a short post =)

I did just learn that UPS isn’t going to be picking up the packages we shipped today, that’ll delay those packages by 1 business day but 2 actual days. Guess I should have known that since it’s on their website. Bunch of slackers!

We are having our traditional “Keto New Year’s” party tonight with our family and some friends. There are 2 boxes of crackers for the children that aren’t doing keto but the rest of the food will be ultra low carb (and delicious!). It’s also the last party I’ll be having any food at for about 4 months, so I gotta make it count =) Here’s what we’re planning on:

Just to be clear: I’m not trying to gain any weight before the contest, that’ll just be more to lose.  I actually lost weight this morning according to my scale. I’m just enjoying some fantastic keto foods before the experiment starts up. Speaking of the weight loss challenge: there are 136 people doing the Keto Chow DietBet challenge, that’s more than I anticipated, cool!

On a COMPLETELY unrelated note: I needed to do some bulk editing of the draft posts for the 100 days of Keto Chow (I used a plugin and a CSV to pre-populate them so I won’t mess things up), ALMOST everything came through right except for the order the posts would appear in the series. They popped into what looked like a completely random order. That meant I got to dust off my SQL skills and do a JOIN query to get all of the postmeta.meta_value for all the posts.post_title LIKE ‘100 Days of Keto (Chow)%’ then I got to change the value and re-populate them into the database with the right number. This was the kind of thing I used to do ALL DAY back in 2009-2014, it’s amazing how quickly I have to go back to StackExchange and get the correct syntax.

Last night we did our yearly New Year keto party, the food was excellent. Today I had my last “normal” day before the 100 days of Keto Chow begins. We went sledding, that was a lot of fun. We also went out to dinner one last time as a family (no I’m not dying). I got the sensible 16oz prime rib along with “loaded” broccoli: 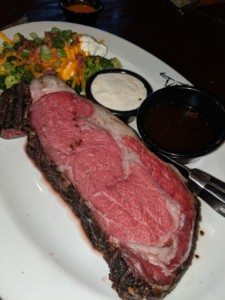 Lastly, we did our weekly Facebook LIVE. Here’s the version that went up live (I’ll have the higher quality one up on YouTube tomorrow):

And so it begins! Today is Day 1 of my 100 days of just eating Keto Chow for all my meals. I’ll be heading over to the Riverton City offices this afternoon to do the weigh-in for their 6 week weight loss challenge and yesterday I did the weigh-in for the DietBet challenge I’m doing as well – there’s still time for you to join in the fun on that one if you need some motivation for 2019.

Today I need to contact a bunch of people that have been away during Christmas vacation – it’ll be nice to get things rolling again on the various projects we have!

The first day of Keto Chow only is done, and the initial weigh-in for the city contest is done! I’ll be able to base my progress off that, though the clothes add some additional weight compared to when I weigh myself in the morning. I forgot to check my blood ketones yesterday, so I’ll be missing one data point. I do have breath acetone levels for yesterday though.

Yesterday we went over to my Mom’s house to help her take down Christmas. She made keto fajitas for everyone, I got to drink my Raspberry Cheesecake. So goes the 100 days =) This morning I mixed up 3 days worth of Keto Chow for me (9) and 4 extras for the teenagers that will be inevitably stealing the mixed Keto Chow – I labeled the ones for me because they have 1 tablespoon of MCT in them (and higher calories).

No GI issues to report yet. In the past, when I’ve gone from 2/3 of my meals as Keto Chow to 3/3 as Keto Chow, I’ve had 1-2 days of diarrhea – taking a probiotic usually fixes that quickly. Dunno if it’s the liquid aspect, the fat, or the liquid fat but there seems to be a big difference between mostly and all the way Keto Chow. That said: people who start a keto diet, irrespective of using Keto Chow or not, frequently have issues with “loose stool” – just search the Keto subreddit for “never trust a fart” and you’ll see the reports =)

Yesterday I completely forgot to eat breakfast until about 3:00 PM – so I ate breakfast at 3, lunch at 5, and dinner at 7. Ended up with about a 4.5 hour eating window. I hadn’t planned on doing time-restricted feeding (also known by some as Intermittent Fasting) but I guess it just happened. I’ve noticed that I’m a little hungry once I start eating but not hungry at all before I start eating, doing a compressed eating window was extremely satisfying. I felt super full and satisfied – stuffed, really.

I did notice some rumbling in my intestines last night. This morning I didn’t quite have diarrhea – more of a 6 on the Bristol scale. Still doing OK on that front =) Might start taking the probiotics tonight if the rumbling continues.

We are going to be using a local market research company to do some blind taste tests next week, comparing Keto Chow with 4 of our competitors. Should be really interesting to see the results! Anyhow, there was some question about how the different sweeteners would interact. In some previous tests we’ve done, if you taste sucralose after monk fruit it amplifies the sweetness substantially. This morning I wanted to test and see if that would be a problem for the taste test which will be randomized for statistical relevancy. I mixed up all 5 of the ones we will be testing next week according to the manufacturer’s directions and using their recommended amounts for water, oil, etc… I want to give all of them a fair chance and if people like one better than Keto Chow, I want to know it and I want to figure out how I could improve.

A few hours later we did our own blind taste test with the employees (and one customer who happened to come in during the test =) here at Keto Chow. The results were interesting, everyone liked the Keto Chow best – ultimately it wasn’t much of a contest. Like I said: I made sure all were prepared exactly the way recommended by the manufacturer. 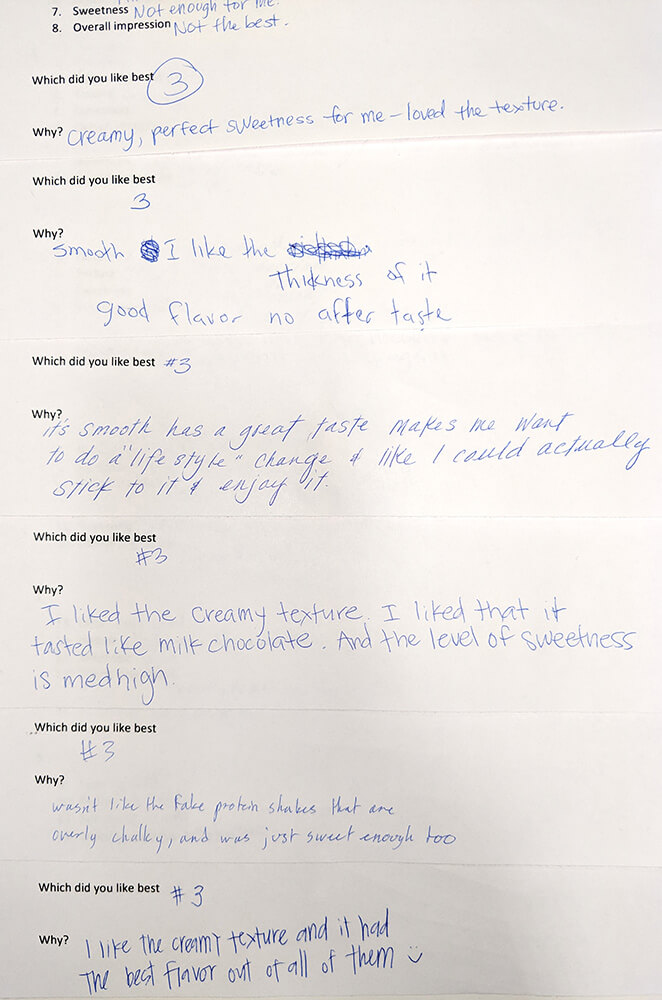 Day 4 is complete. First day being home. I was expecting it to be a little harder to not eat anything else since I’m at home but thus far I haven’t had any issues at all. I did go to Costco and buy groceries for the family, along with 3 gallons (6 two-quart containers) of 40% fat heavy cream. That’ll last a bit =)

We did another blind taste test, similar to what we did yesterday, with our children today. One of them did NOT prefer Keto Chow, the other 5 did. That brings the total between the 2 tests to 12 individuals, 11 preferring Keto Chow.